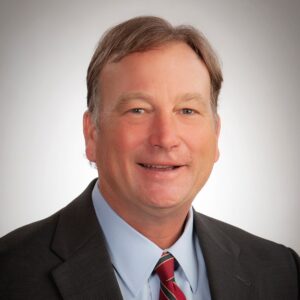 Alan joined the Kansas Chamber as the President and CEO in March 2017.

A Kansas native, Alan earned his undergraduate degree from Wichita State University, a Master’s in Public Administration from the University of Pennsylvania and a Juris Doctor from the Washburn School of Law. He has been involved in politics and public policy at the local, state and federal levels for more than 25 years.

In addition to directing his own public affairs consulting firm, he has managed statewide political and issue campaigns and served on the staffs of U.S. Senators Bob Dole and Sheila Frahm.

Alan served as an election observer in the 2014 Ukrainian Presidential election and as a campaign advisor to the 2014 campaigns of Congressman Mike Pompeo and Senator Pat Roberts.  He was a senior advisor and National Coalitions Director for the 2016 Trump for President Campaign.   He also served on the Trump-Pence transition team working with the Public Liaison office and the Department of Agriculture.

He has been an adjunct instructor for the Business School at Baker University teaching undergraduate and graduate business courses.

He and his wife, Holly, live in Topeka where Holly is a nurse practitioner and is the co-owner of Oasis Family Medicine Associates, a direct primary care clinic, which takes only monthly subscription fees, not insurance. They have three adult children.