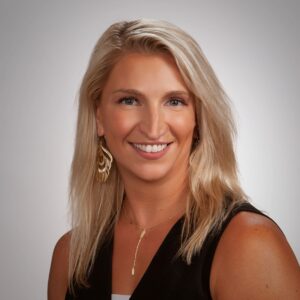 Christie Kriegshauser serves as Vice President of Political Affairs for the Kansas Chamber of Commerce. She assists with implementing the Chamber’s statewide political strategy, focusing on the recruitment, training, and campaigning of qualified political candidates and other Chamber efforts associated with political affairs.  She supports lobbying efforts on behalf of the Chamber and its affiliated members.

Christie first worked for the Chamber as its Vice President of Political Affairs before becoming Chief of Staff for Kansas Speaker Ray Merrick.  Prior to the Chamber, she served as Communications Director and then Chief of Staff for Kansas Speaker Mike O’Neal.  In her role in the Speaker’s office, Christie managed both the legislative and political aspects of the House majority caucus including redistricting and the subsequent House campaigns across the state.

She also worked for Speaker Merrick when he was Kansas House Majority Leader and former Kansas Lt. Governor Jeff Colyer when he served in the House.

She has been an active participant in many campaigns since 2004.

Christie earned a bachelor’s degree in Political Science from the University of Kansas. She and her husband, Ryan, an attorney in private practice, have three daughters.