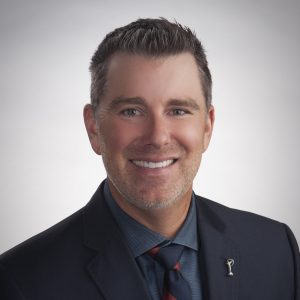 Prior to joining the Chamber, Aaron worked in the financial lending industry.  For 12 years, he was a Regional Manager/National Accounts for New Century Financial Corporation.  Aaron represented one of the nation’s largest financial lenders in the country in the sale of financial products to national banks and third party originators. He worked in Saint Louis, MO, for six years before transferring to Kansas City.

Born and raised in Wichita, Kansas, Aaron attended Wichita State University and transferred to University of Kansas where he earned a Bachelor of Science in Business in 1994.

Aaron currently resides in Lawrence, KS with his wife, Kylee, who works in Ottawa, KS, for American Eagle Outfitters, HR Site Leader.  They have two children.  Aaron enjoys spending time with his family playing golf, boating, snowboarding and BBQ’s on the deck with family & friends.